FREE Shipping in U.S. for a limited time (except to Alaska & Hawaii) - Take advantage of the significant savings! 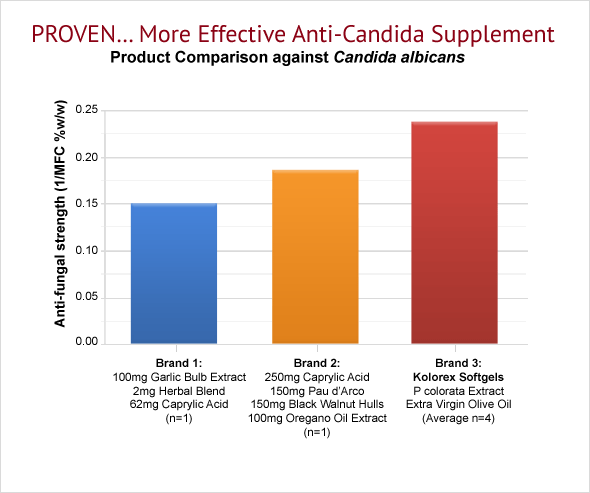 Kolorex products are developed by years of science.

In 1982 researchers at Canterbury University published compelling results showing the extraordinary anti-fungal activity of Horopito extracts against the yeast-like fungus Candida albicans. This activity is due to the main active ingredient, polygodial.

Since the identification of polygodial in Horopito, there have been numerous scientific papers published confirming both in vitro and in vivo this unique and effective anti-fungal activity.  Download our Scientific Summary to find out more.

The graph below shows the research from scientists at the University of Canterbury showing an extract from New Zealand’s Horopito plant containing polygodial was more effective at killing Candida albicans than the powerful pharmaceutical anti-Candida drug, Amphotericin B.

The graph shows polygodial has a larger zone inhibiting the growth of Candida albicans and the zone is formed within 1 day. This means that polygodial has stronger and faster antifungal action than Amphotericin B.
(Reference: McCallion et al 1982. Planta Medica, vol 44, pp134-138)

Traditional Usage – A History of Safe Remedial Use

Plants containing polygodial have been used traditionally as foods and medicines in NZ, Japan, South America and Africa. This traditional use supports its safe use. Polygodial and Horopito have also undergone scientific tests to ensure that they are safe for human use (both external and internal).  The Maori people of New Zealand had known of the strength of this ancient plant for centuries – it was one of their traditional herbal remedies.  Maori would chew the leaves and spit the juice on to skin complaints.  And it was also used by the early European settlers.  They would boil Horopito leaves and drink the resulting tea as a cure for stomach-ache.

Ongoing Scientific Testing – Monitoring Efficacy Horopito leaf, Horopito extract and Kolorex products are scientifically tested by Cawthron Institute and Southern Cross Plant Science to check anti-fungal efficacy against Candida albicans and to assay the polygodial content.
Each batch of  Kolorex soft gels undergoes a challenge test for efficacy. In the laboratory the sample is inoculated with approximately one million live colonies of Candida albicans. The number of colonies are monitored and measured after 3 and 7 days to ensure the efficacy of the product.
Each super-critical CO2 oleoresin extract of Horopito used in Kolorex creams and soft gels are analyzed to determine the polygodial content. Polygodial is the compound which ensures anti-fungal activity against Candida albicans and gives Kolorex creams their heat and soft gels their peppery pungent taste. The hotter they are the stronger the anti-fungal power.

Building on traditional usage and the University of Canterbury discovery, Forest Herbs Research sampled wild-growing Horopito.  They discovered a 5 times variation between populations in effectiveness against Candida albicans.  Forest Herbs Research then spent years learning how to domesticate and sustainably harvest these slow growing shrubs, eventually planting two farms in the variety that is most powerful against Candida albicans.  These are known as Kolorex Horopito.

Horopito leaves contain such good defenses against fungi and predators the plant has been able to survive largely unchanged for 65 million years.  It is one of the world’s oldest flowering plants. However, its age means it has a very primitive vascular (water transporting) system so it dies quickly if the ground is dry.  Forest Herb’s solution was to site both its farms next to the temperate rain-forests of the Kahurangi National Park.